Costs less than 40p per treatment

Costs less than 40p per treatment

You are here: Home › Paul Askew

Paul lives in Suffolk with his wife Sharion and two of their three children Rachel and Robert. Paul has always been interested in pigeons and he and Sharion have built a hand-made pigeon loft together.
The loft measures 7′ x 4′ and has two small aviaries, which is plenty big enough for his team of 10 pigeons. 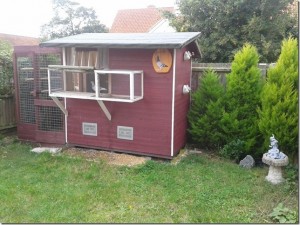 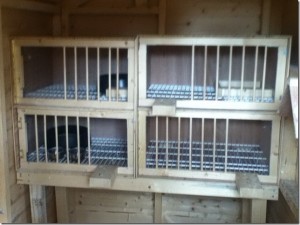 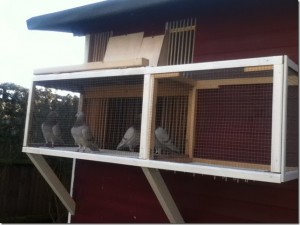 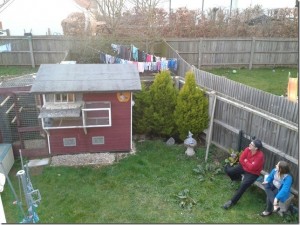 Paul and Sharion were very pleased when they fitted their new floor grill, the finishing touch!
At this time of year (January) Paul is feeding his pigeons Versele-Laga Best All Round; but since he attended this year’s Blackpool Show of the Year he has decided to try Harker’s Wonder Pigeon, because it has had very good reviews due to the fact that it is a natural product which helps the internal form of the birds, with consistently better droppings, feathering and appetite.

Paul also feeds his birds on Hormoform, which they love. He has great faith in Hormform because it helps to provide his birds with any shortfall of proteins, carbohydrates, fats etc. that they may not get with their feeding. 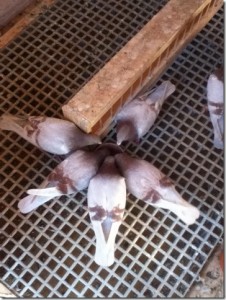 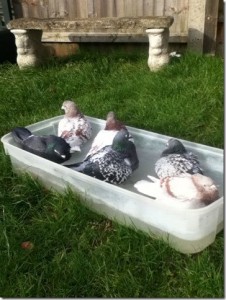 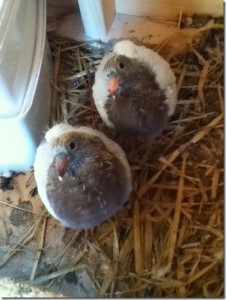 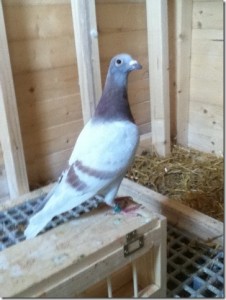 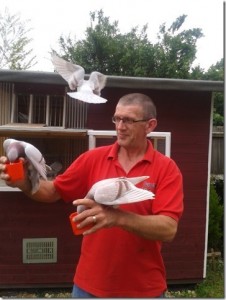 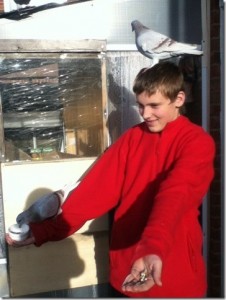 Paul’s first bird was Saracen, his good buddy and test pilot, who is obviously very special to him. He says “I like to think that we are best mates, and we started this rewarding hobby and adventure together …. soppy I know but my birds give back to me all the love, care and attention that I give them. I love it!”

Paul found it really scary when Saracen went on his first flight outside of the aviary, he was just praying that he would come back and stay!

The part Paul enjoys the most is when he and his son Robert have playtime with the birds. “It’s so lovely to be able to share my passion with my children” he says. “I love the quiet time with my daughter Rachel when we are waiting for the pigeons’ return from a training flight.”

2016 is a very exciting prospect for Paul, as it will be his first true year racing. He wonders whether it will become apparent that he may be more of a pigeon keeper than a pigeon racer! However, he intends to fly south with the Norfolk and Suffolk South Road Championship Club. “Although winning would be a bonus, as long as my birds return safe that will be enough for me – hence the name given to my pigeon loft …. HOMESAFE.”

FREE Shipping on UK orders over £49

We use cookies on our website to give you the most relevant experience by remembering your preferences and repeat visits. By clicking “Accept All”, you consent to the use of ALL the cookies. However, you may visit "Cookie Settings" to provide a controlled consent. Read More
Cookie SettingsAccept All
Manage consent

This website uses cookies to improve your experience while you navigate through the website. Out of these, the cookies that are categorized as necessary are stored on your browser as they are essential for the working of basic functionalities of the website. We also use third-party cookies that help us analyze and understand how you use this website. These cookies will be stored in your browser only with your consent. You also have the option to opt-out of these cookies. But opting out of some of these cookies may affect your browsing experience.
Necessary Always Enabled
Necessary cookies are absolutely essential for the website to function properly. These cookies ensure basic functionalities and security features of the website, anonymously.
Functional
Functional cookies help to perform certain functionalities like sharing the content of the website on social media platforms, collect feedbacks, and other third-party features.
Performance
Performance cookies are used to understand and analyze the key performance indexes of the website which helps in delivering a better user experience for the visitors.
Analytics
Analytical cookies are used to understand how visitors interact with the website. These cookies help provide information on metrics the number of visitors, bounce rate, traffic source, etc.
Advertisement
Advertisement cookies are used to provide visitors with relevant ads and marketing campaigns. These cookies track visitors across websites and collect information to provide customized ads.
Others
Other uncategorized cookies are those that are being analyzed and have not been classified into a category as yet.
SAVE & ACCEPT